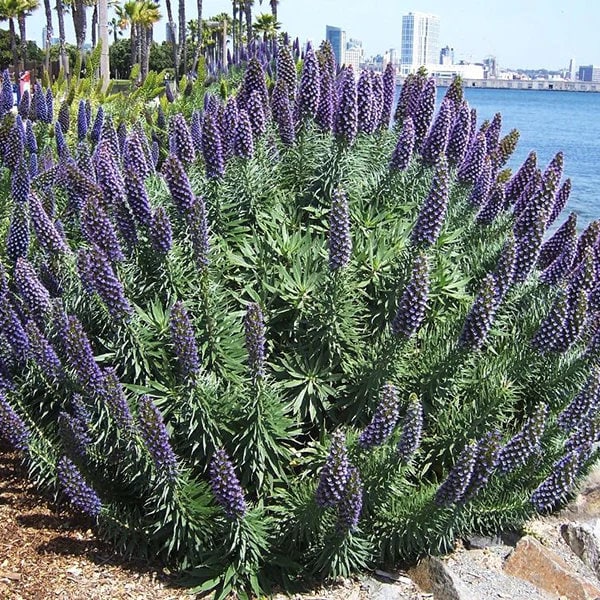 Echium candicans, the pride of Madeira
Plant is 1 feet tall and ship in 6" pot.

Echium candicans, commonly known as Pride of Madeira, is an evergreen, mounding, rapid-growing, biennial or short-lived perennial subshrub that typically matures to 5-6’ tall spreading to 6-10’ wide. It is endemic to the island of Madiera where it grows on rocky cliffs and terraces in the Central Mountain Massif at elevations ranging from 2,500’ to 4,600’. It is a shrubby spreading plant that has escaped cultivation and naturalized in a number of areas around the world where it has been introduced, including parts of southern California where it is now listed as an invasive plant in some locations. In the first year, each plant produces a basal rosette of prominently veined, narrow, lanceolate to elliptic, hairy gray-green leaves (each to 6-10” long). In the second year, woody, unbranched, spire-like flowering stalks rise above the foliage rosette to 20” tall, each stalk bearing from late spring through summer showy cylindrical terminal panicles (to 12” long) of small but abundant narrow bluish-purple to white flowers with protruding reddish stamens. Flowers give way to nutlets.